There are many old plantation inns on Nevis that have been renovated and turned into boutique hotels that can be visited if only for a spot of lunch.

Once the site of Horatio Nelson’s marriage to Fanny Nisbet (the tree they wedded under still stands there today), now it is a luxury Relais & Chateaux hotel. It has the remains of a mill tower now restored and turned into a private dining room; I’m told it is popular for weddings. The original plantation house and buildings have been turned into luxury accommodation and a bar/restaurant area with amazing panoramic sea views. This was the hotel Princess Diana chose for her first holiday with the little Princes following the announcement of her divorce over 20 years ago and you can see why as it’s tucked away in the hills. A haven of luxury and the food was amazing too. They understood the meaning of “dairy-free” perfectly. 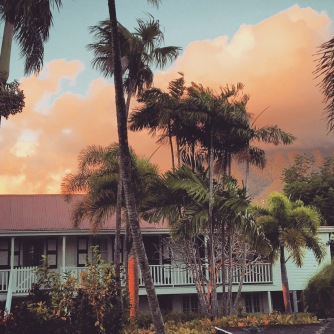 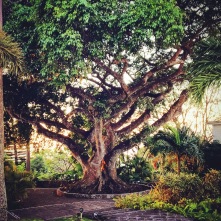 This plantation has been family owned and run for generations. Also tucked away on the side of Nevis peak Volcano, surrounded by luscious gardens and rainforest it still retains the feel of it’s historic past. When you visit this place it feels as though you’ve stepped back into the best from Britain’s colonial past. All the accommodation is in small wooden Caribbean huts that are brightly decorated lovingly by the owners wife who also owns a gift shop on site called Fanny’s Closet full of arts, crafts and original gifts made by local people. Their Friday evening pizza night is a must if you have children as this is relatively informal and even the owners own children join the guests for games on the lawn. 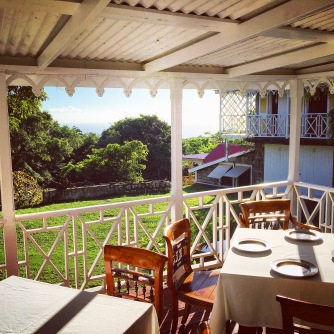 Once owned by the famous Nisbet family and childhood home of Fanny the wife of Nelson; this plantation sits on Nevis’s Atlantic coast and is situated right by the beach. The resort has its pool facilities practically on the beach with a gorgeous raised decked area that offers panoramic coastal views from your sun lounger. There’s also a lovely bar/restaurant right on the beach that has shuttered open windows so you can feel the salty air breezing through whilst you eat local and international dishes. We sat and watched a local fisherman line fish stood in the waves competing with diving brown pelicans for his catch. This beach was much rougher than the ones on the Caribbean sea coast so I wouldn’t advise it for swimming but it certainly had breath taking views and a heavy dose of drama.

All the plantations on Nevis are unique in their own way and Golden Rock is no exception. This plantation was once completely reclaimed by the rainforest and the current owners renovated the old stone buildings and mill tower cutting away the forest and replacing it with amazingly tropical botanical gardens. The gardens and grounds extend for a great distance and there are a variety of different styles of accommodation to choose from including staying in the original mill tower or a small Caribbean wooden hut or even a quaint stone cottage. The main bar/restaurant area is set in a large stone courtyard area that’s multi-level, containing designer pools containing koi carp and other fish with waterfalls and gentle fountains. It’s an architectural delight but not advisable if you have any mobility issues or young children as steep drops abound! The staff here also seemed a little less friendly than elsewhere on the island and unable to understand allergies too which was a surprise as the guests we met that were staying there seemed to be mainly American. 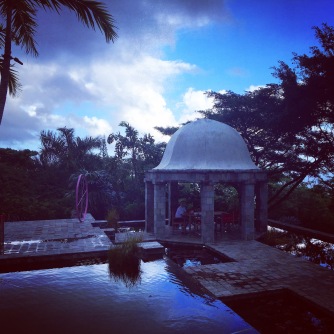 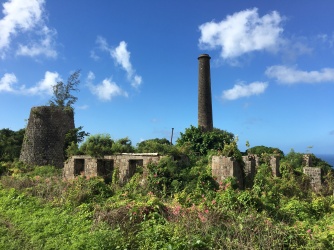 If underwater ruins are more your thing then there are also lots of famous shipwrecks off the Nevisian coast so perfect for those who love scuba diving.

Tonight there was a grand opening ceremony marking the European Capital of Culture – Pafos2017 in the Town Hall square in centre of Paphos.

The opening ceremony showcased the history, the multiculturalism and the modern culture of Pafos as an integral part of wider European culture. The ceremony was designed and produced by a Creative Team of Cypriot artists and intellectuals, working with Walk the Plank.

Inspired by the myth of Pafos, it has at its heart the founding myth of Pygmalion, the Artist and his creation, Galatea.

The celebratory performance attempted to portray the core concepts of the Open Air Factory, such as creativity, originality, artistic excellence, and also multiculturalism, diversity, as well as the hope for a unified country in the future.

Young people, children and volunteers from all over Cyprus joined professional performers from all over the island. Both Greek Cypriot and Turkish Cypriot musicians and singers sang in unison with a Danish choir and a Jazz Orchestra from Aarhus, the partner Capital of Culture. As Pygmalion invoked the spirit of Aphrodite to breathe life into the statue he had carved, light and fire illuminated the sky above Paphos’s newly restored city centre.

Original compositions, as well as adaptations of music, choreographies and projections were brought to life by actors, dancers and hundreds of children who illuminated the moment of Pafos’ birth and marked the opening of the European Capital of Culture – Pafos2017.

For more details of Paphos, Cyprus and a great house you can rent there to enjoy the European Capital of Culture year long festivities please see http://www.bellavistacyprus.com

As a seasoned traveller to America and parts of the Caribbean I’m used to Americans’ telling me somewhere is steeped in history that there are really ancient buildings to look at, only to find once I arrive that the “ancient” building was built in 1906, so actually more modern than the house I own in the UK! Often when they say historic they mean 20th century history… so when I was told that Nevis was steeped in history by an American, again I took it with a pinch of salt…oh how wrong we were!

We were impressed by the sheer amount of history crammed onto such a small island, don’t get me wrong it’s not Pompeii, but for a tiny Caribbean island there is more to see historically than you would think.

The Hamilton museum in Charles Town tells the history of one of America’s founding fathers Alexander Hamilton who was born illegitimately on the island and orphaned at a young age but taken in by a cousin. He landed an apprenticeship for a local plantation owner, whom he impressed so much he gained a transfer to a role in Manhattan but he also to witness first hand the torturous life experienced by slaves working in the Caribbean. Hamilton was one of the people who helped to drive the passing of the anti-slavery laws in America, which is why he’s an even bigger hero to those who are descended from former slaves on Nevis.

Photo of Alexander Hamilton from Biography.com

The Nevis museum, in the same building as the Hamilton museum down on the seafront in Charles Town, gives the history of the island from it’s early American Indian days to the battles during the 18th and 19th century as the British, Dutch, French and Spanish fought for control of the sugar industry in the Caribbean. Nevis earned its name as the “Sweet Island” as it was the most prolific producer of sugar cane in the entire Caribbean, in its heyday producing nearly double the volume of its closest rival island. The British called the island the Queen of the Caribee and as the majority of merchant boats needed to collect sugar cargo from the island it meant they off loaded there too so it also became the largest slave market in the region. There are lots of artifacts in the museum from the various periods of Nevis history including salvaged items from some of the shipwrecks, as the waters around St Kitt’s and Nevis are some of the most treacherous in the Caribbean. 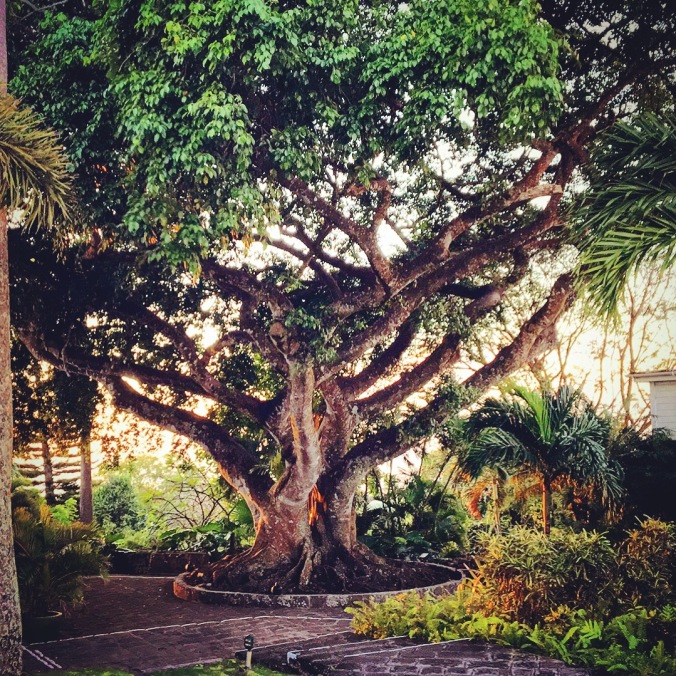 Horatio Nelson visited the island during its heyday and was introduced to a young widow called Fanny Nisbet whose family owned a plantation on Nevis and whom he wedded on the island at another plantation inn called Montpelier. There’s a museum that charts his life and that of his love Fanny’ s family on Nevis. More interesting is that Montpelier is now a Relais de Chateaux resort, where Princess Diana stayed for a holiday with the Princes following her divorce to Charles, and you can visit the big old tree there that Nelson married Fanny beneath.

Stay tuned for more details about the plantations you can visit….

After an eight-hour flight (if you don’t count the hour spent on the ground at Antigua airport) we eventually landed into St Kitts International airport located in the Lesser Antilles in the West Indies.  St Kitts airport is about a 10 minute drive from the main capital city Basseterre so is ideally situated if this is to be your final destination, however our journey’s end was sister island Nevis, known fondly by the 19th century British as the Queen of the Caribees.

Our accommodation provider arranged airport collection for us and we were greeted by Almon who then gave us an impromptu tour of St Kitts on our way through to our transfer.

We drove along the road where the Atlantic and Caribbean seas are separated by a tiny strip of land so you can easily walk from one beach to the other!  We learnt all about the cheeky Vervet monkeys that inhabit both St Kitts and Nevis, who are the main reason the island often has to import mangoes in from overseas for the annual Mango Festival! 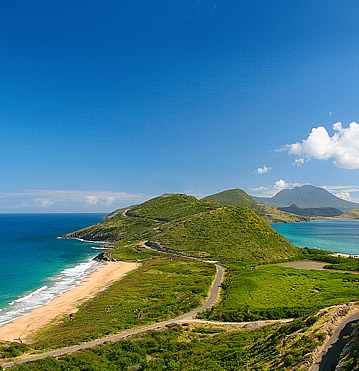 Once we reached Reggae Beach, at the furthermost tip of St Kitts, we could clearly see our destination Nevis across Cockleshell Bay – our target Oauilie Beach was only 2 miles across on the other side.  We boarded a speed boat with 3 other newly arrived British tourists and enjoyed our first bottle of cold Carib beer, whilst watching our first amazing Caribbean sunset over the sea.  This type of airport transfer we discovered is by far the best way to arrive!

We clung onto the open deck of the speedboat in order, to enjoy the cool sea spray after our long haul flight. The boat danced on the waves, as it propelled us through the water and we arrived onto Oauilie beach 15 minutes later feeling extremely refreshed. Almon off loaded our luggage into his pick up truck and we departed to our apartment within the Carina complex in the vast Hamilton Estate.  One of the many old sugar plantations on the island; Carina is set off the beaten path half way up the side of Nevis peak, the largest and main volcano on the island. Virgin rainforest is above the apartment building and the land below contains the ruins of a sugar mill and factory, that have been reclaimed by the rainforest; the top of the mill tower protrudes onto the skyline.

Carina is just a 5-minute drive up the hill from Charles Town the capital of Nevis.